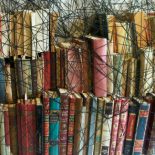 Within the Coventry Inspiration Book Awards we have one called Murder and Mayhem.

Every week from 20 January 2014 the two books with the least votes in each poll will be eliminated, until we have the winners.

After round four we have seen Gillian Flynn’s Gone Girl and Camilla Lackberg’s The Hidden Child eliminated.

Get voting by clicking right HERE.

Now only two weeks left to keep voting until the final winner is determined.

That’s a very fine shortlist to read.  And good luck to those still in the running.